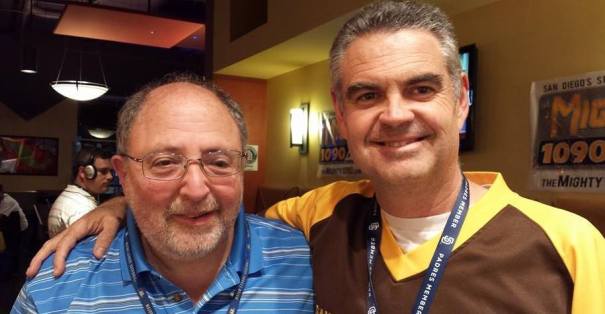 About 2 years ago, I heard John Kentera mention that Barry Bloom would be in town for a Padres game and would be doing the post game radio show from Lolitas.  I mentioned to my co-author on Padres360.com, Dr. Rebecca Herman, that I wanted to get a picture with Barry after the game.  We walked into Lolitas and I waited until there was a commercial break and asked Barry if I could take a picture with him.  He said, “absolutely” and we took the picture I posted above.

The next day, I posted the picture on Facebook and tagged Barry in it and posted how special it was that he took the picture with me.  He was one of the Padres writers I would read back in the 80’s when I was a teenager following the Padres in the newspaper and it was special to me to meet him.  He posted back that he wished I would have let him know when we met how special it was for me.

In the last 2 years, I have made a point to read Barry’s columns on MLB and comment about them.  His style of writing and the topics he chooses to write about I enjoy reading and I have learned from him.  Barry’s career has spanned 4 decades of sports, and he maintains a passion for baseball and the men who play it.  Not only is he a writer, he is also a very proud grandpa.

We hope you will enjoy listening to Barry Bloom talk about his life and his thoughts on the San Diego Padres past and present.