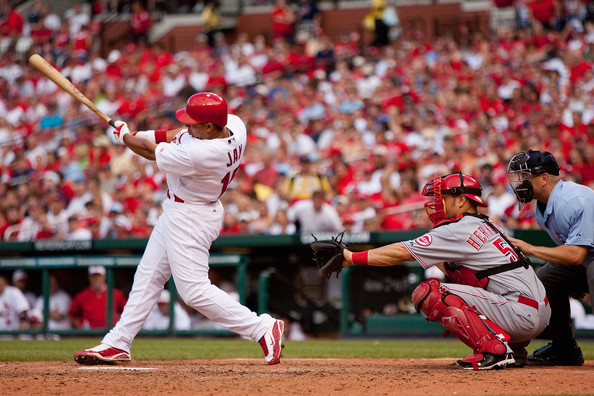 After the Padres traded 2B-SS Jedd Gyorko to the Cardinals for OF Jon Jay, my cousin Joe McBrayer, who writes a blog about the Cardinals, asked me if I would write-up  my thoughts of Gyorko and what the Cardinals were getting since I had watched him play for the last few years. I wrote a brief story about him, which Joe posted on his blog: McBrayer’s Thoughts of Gyorko in Cardinal Red Baseball Blog

“Jon Jay has always been a popular player with the Cardinals since his first appearance in 2010. His laid back personality makes him very approachable with his teammates and fans. I know he also attracts the young fans too. He always signs anything that comes his way from the kids that try to get autographs and pictures with him. With this in mind he will bring his laid back approach to the Padres. He is known as a positive force in the club house that tries to keep the morale up. When healthy Jon Jay’s defense is top notch when covering center field. He is a gap hitter that is able to keep a .300 batting average or higher. He had a down year in 2015 due to injury but will be able to bounce back to help the Padres as the fourth outfielder or a everyday starter. I tend to think he has a lot upside to bring to the Padres as a leader. He will enjoy the environment that San Diego brings since he is from Miami, FL. We will miss him here in St. Louis but we also know that he will get more playing time with the Padres.”

A positive force in the clubhouse, helps keep the morale up, and a gap hitter who has a six-year Major League batting average of .287.  It’s no wonder that A J Preller wanted him on the Padres. Our new manager, Andy Green, seemed pretty positive about the acquisition as well. In an interview on @MLBNetwork during the Winter Meetings, Green had this to say about Jon Jay: “He has passion and leadership; he is a culture changer.”

We look forward to seeing Jon Jay in a Padres uniform!