Home › At the Ballpark › Just Another Night At The Ballpark

Just Another Night At The Ballpark

It’s Friday night, May 31, 2013 … the first of a three game series with the Padres hosting the Blue Jays. It is inter-league play and we seem to have many Canadians (Blue Jay fans) who have decided San Diego would be a great place to take a vacation and see a few ballgames.

We were treated to national anthems for Canada and United States – both singers did a very nice job. I must say that we were a bit disturbed at the lack of respect shown by the Blue Jay fans sitting in section 108 (over the dugout) … they got rude and rowdy during each anthem … show some respect!

Also, it is the Padres 10th Annual Salute to the Negro Leagues! This will have a story of its own but suffice it to say that having these gentlemen and icons at Petco Park was a thrill and an honor:

It was great seeing Minnie Minoso (age 87) throw out the first pitch. It was a bit shy of the plate but great effort nonetheless. Clayton Richard caught for Minnie and they had an exchange afterwards. Nothing could have foretold at that moment that Clayton would also become a major factor in tonight’s game.

The game began with Jason Marquis pitching. The Blue Jays scored 2 in the 2nd with a Home Run by Rasmus that also scored Arencibia. In the 4th, Encarnacion hit a Home Run to Deep LF. The Padres can’t seem to score and are down 3-0 in the bottom of the 5th. Carlos Quentin gets on base with a Hit by Pitch. Yonder Alonso Singles to CF and Quentin goes to 2B. Grandal strikes out swinging. Jedd Jyorko hits a Line Drive Double to deep RF >> Quentin Scores >> Alonso Scores and Gyorko Advances on throw and E2 throw >> Gyorko SCORES = Padres are TIED!

We have a 14th Inning Stretch! 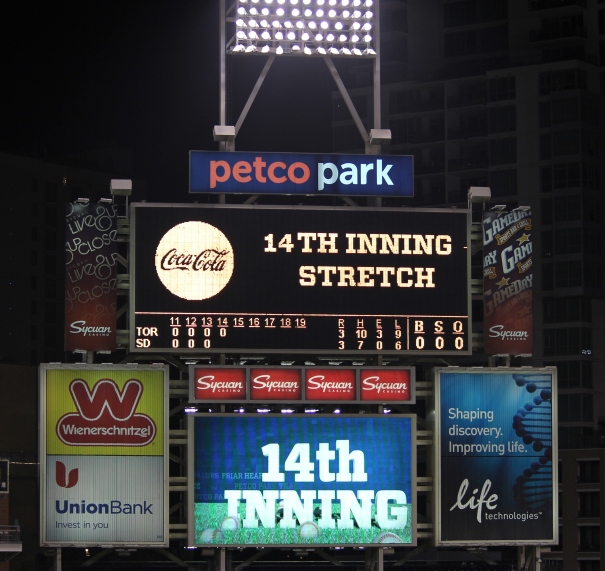 “Take Me Out to the Ballgame” … take two!

The seagulls are getting annoyed. They typically arrive about the 8th inning and wait patiently to do their part to clean the ballpark before the cleaning crew can even start. But, as the game stretches onward, they get more impatient. They are circling, perching, and several have taken to being so bold as to join the Outfielders and walk and walk and walk. Between the 16th and 17th innings, the in-game folks focus the cameras on one particular bold seagull and start playing … “Birds the Word” … that’s all the fans needed to all stand and start flapping like a bird!

Now it is the bottom of the 17th. Grandal has a Lineout to LF; Gyorko Singles … the Richard drops a great bunt (groundout) that moves Gyorko to 2B. That sets the table for Jesus Guzman who then Singles to CF >> Gyorko SCORES!

Jedd Gyorko Slides into HOME for the Winning Run! Victory is SWEET – especially after 17 innings!

Jesus Guzman is ready for his post-game interview with Fox Sports SD’s Kelly Crull … but he notices that Evereth Cabrera is plotting an ice water bath. He literally uses Kelly as a human shield … SPLASH!!  I admire Kelly … she not only took the splash with grace but she also smiled and conducted the interview. What a pro! …  just another night at Petco Park!

2 comments on “Just Another Night At The Ballpark”